” How far should government go in allowing landowners to protect their beachfront properties, given that many solutions, like building hard beach barricades, can in some cases cause worse erosion nearby? 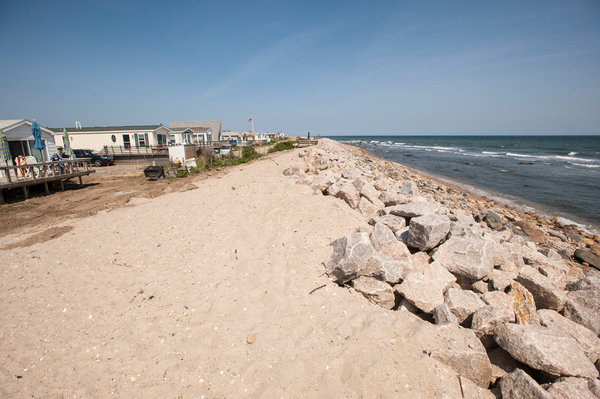 The idea that a barrier at the trailer park could have a negative effect at Ditch Plains was not new.  East Hampton’s own water revitalization plan of 1999 — which serves as a binding code — concluded that the trailer park’s existing protective rocks “may influence erosion at Ditch Plains” and that more extensive work there could “aggravate this situation.”  After the storm, East Hampton officials did grant the park a permit to restore its dune “with sand and relocation of existing rocks,” $2,000 worth of work all told.

But the park trucked in large new rocks, building the wall so it appears to jut farther into the sea — covering a narrow beach that was once exposed at low tide — and higher into the air.   Through the spring, the storm-ravaged beach at Ditch Plains stood like an open wound at the heart of the hamlet; once vast and sandy, it was worn down to dark and ugly hardpan — and at high tide parts disappeared entirely.  Ditch Plains often suffers some erosion in the off-season from hurricanes and winter nor’easters; it is usually restored naturally by summer.  But that did not happen this year.

As Memorial Day approached and the town had to close the beach to bathing, tensions rose, and the search for reasons began.  The major environmental group here, Concerned Citizens of Montauk — which often finds itself at odds with Mr. Wilkinson, a Republican and former Disney executive — identified one thing that existed near Ditch Plains now that did not exist before: the newly rebuilt sea wall at the trailer park.